What is “chiropractic is…”?

chiropractic is… was born as a result of being unsatisfied with the current state of public perception and utilization of chiropractic.

It was created to address the significant lack of accurate, relevant and socially and technologically in-touch educational materials in the profession.

Go to Google and type in “chiropractic is.” I dare you. The results aren’t pretty. Autosuggest quickly produces the results below. I wouldn’t think of typing those words here as the internet is obviously riddled with those keywords already. The good news is that it can be better. Much better. But only with a focused effort to change the public conversation and flood the market with what chiropractic truly is. 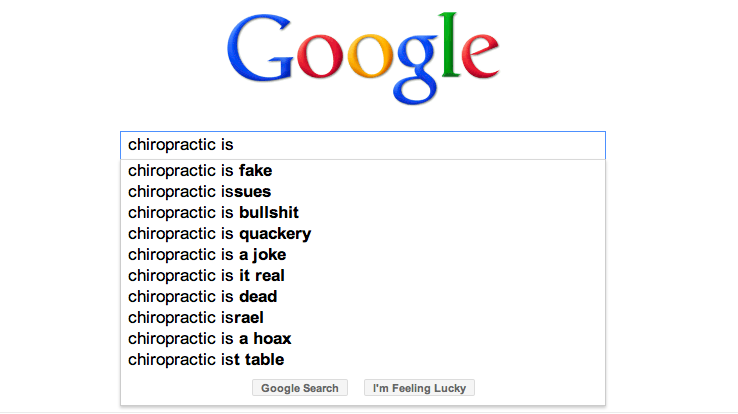 For far too long the chiropractic profession has allowed others to define us instead of clearly and authoritatively stating who and what we are. At the same time, we’ve relied heavily on dated, unattractive, unproductive and out of touch chiropractic patient education products and marketing ideas.

For too long the chiropractic messages to the public have been weak and defensive. Constantly trying to defend and legitimize our value instead of claiming it ourselves. The chiropractic is… message is clear. It is assertive and it is definitive for your practice members. It addresses misconceptions and reframes the conversation in a manner we desire for their ultimate benefit.

The graphics are contemporary, modern, artistic and a bit edgy for some. Some people may think them not professional enough. Others may think it is not reflective of a “doctor’s” office. It is not for them.

It’s for a new generation. Individuals without their parents misperceptions. A generation raised by the internet and that looks there for information, acceptance, and connection.

Chiropractic has always contained a simple message. One that can be as profound as a simple spiritual truth or as in-depth as the most lengthy scientific dissertation. However, the end product, optimal expression of life, is not dependent upon the message alone.  It is dependent upon the ability of that message to be understood and compelling enough for the individual to not only try chiropractic, but to utilize it for a lifetime as we all do.

Not all will. Not everyone values what we value. That is evident by the choices people make all around us. But many more would make that choice if they only knew it were available to them.

My hopes are this office educational system and material will assist you in communicating the message effectively and increase our collective impact on the global health and well-being of society.